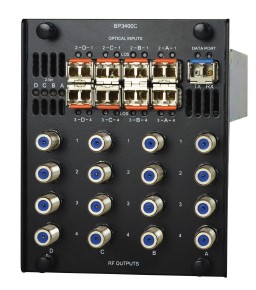 ARRIS’ BP3400C‐00 Optical Receiver Back Plate converts optical signals to electrical signals and passes them through high‐speed connectors to up to four DR3450N Quad Digital Receiver modules to which it is mated in the CH3000 Chassis. Model RR40xx‐00‐PI series dual‐channel optical receiver SFPs are used to receive the optical signals from nodes in the network. Eight such SFPs are used (as shown in the photo) when the back plate is mated to four DR3450N modules using 1‐fer mode. Each DR3450N module provides four separate receivers in each chassis slot (i.e. each receiver having a discrete optical input and RF output).