The ARRIS NC1500 is a Hybrid Fiber Coax (HFC) Network Controller that enables interactive applications with ARRIS’s DCT2000 terminals. The NC1500 enables interactive sessions between application servers and the DCTs by translating Internet Protocols (IP) to deliver data packets through the out-of-band data channel. The return path serves as the upstream data path where the NC1500 aggregates demodulated data bursts and routes the data to the appropriate server. 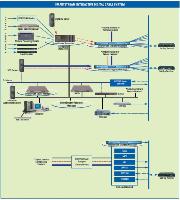 The ARRIS Advanced RPD (ARPD) offers greater demodulator density in a more-compact chassis than its predecessor, the RPD-2000. It offers a larger number of upstream demodulators in a smaller physical package.

Performing the same functions as the RPD-2000 while saving rack space, the ARPD allows multiple upstream demodulators to be placed in each upstream path.

This modular, 1 RU product supports the inclusion of up to six removable (hot-swappable) ADM-4000 demodulator modules. It increases the bandwidth capacity of each upstream return path, allowing the system to support increased VOD penetration and the introduction of new interactive features, such as switched digital video. 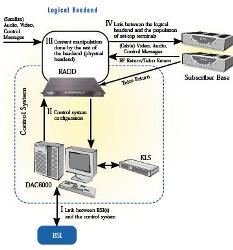 A UPS system is included in the standard configuration to ensure an orderly shutdown of the system during power outages.

Data input is configurable through Ethernet and serial connections. The OM2000 Quadrature Phase Shift Key Modulator (QPSK) modulates data on a 1.5 MHz wide carrier in the 71 to 129 MHz band with transmitted data multiplexed either in the OM2000 or externally.

The ARRIS OLL1000 (Offline Loader) is a specialized carousel server that provides the capability to rapidly load numerous code objects on various set-top box types in a warehouse environment or other staging area independent of the production system. The OLL1000 uses broadcast functions to clear stale code and/or configure mixed set-top types, so that no individual set-top addressing/configuration is required.The OLL1000 provides the warehouse with more control over code suites. It does so by keeping the loading independent, which has the added benefit of pre-loading set-tops in anticipation of planned code upgrades to support field installations on the day of the code upgrade. It is possible to create the code assignments for the new code a day or two in advance, providing the warehouse with more control over the code suites being pre-loaded.As shown in the figure below, the OLL1000 system consists of an OLL server, an OM1000/2000, and a population of set-tops. The OLL provides a canned OOB transport stream, necessary configuration messages, code download control messages, and a DCII-compliant code download object carousel to allow a set-top or host to download the desired suite of code objects for a particular warehouse or region.

The ARRIS RPD2000 (Return Path Demodulator) is an essential component of a local access network configuration. It provides the upstream link that is needed for communications with set-top terminals. The ARRIS RPD2000 terminals provide essential information such as Aloha interactive data, pay-per-view (PPV) purchases as well as critical status monitoring data. Data is received by burst demodulator modules within the ARRIS RPD2000.

The ARRIS OM-1000 out-of-band multiplexer/modulator, provides an out-of-band data stream to the digital set-top terminals. The ARRIS OM 1000 is primarily used as a signaling channel but can also provide for transmission of program guide information, code downloads, InfraRed codes, as well as application information. It is also utilized as the downstream path in an interactive system.